A very early painting (circa 1830s) of The Singapore river , the view from Fort Canning .
The artist presents a Venice like submerged lagoon impression of the early town and its lifeblood The Singapore River. 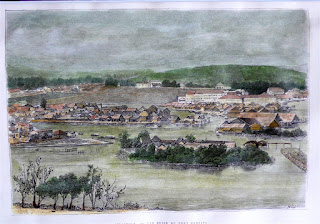 This article is about a single photo taken in the early 1970s of a small unassuming shrine at the Leng Hiang Tua temple in North boat quay, on Clark Quay at Read Bridge across the Singapore River.
Photos of the temple and its activities have been the main inspiration of the blog. 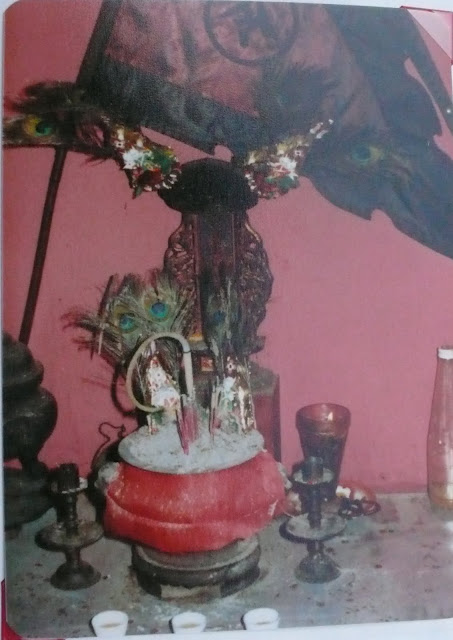 At a time when I was learning about Gods Deities and Taoist traditions I used to visit The Leng Hiang Tua temple as a "home" away from home. I befriended Ah Hui the medium and the members, and we enjoyed many adventures together which I intend to eventually detail in these pages.
The small shrine in the photo is easy to miss. After a 100 visits to the temple I hardly knew of its existence. One time the caretaker told me the story of the temple, how some boys found an old statue of Lo Chia, The Third Prince in the muddy field of the Duck farm existing pre war along River Valley road, where the public swimming pool was situated later.
The boys washed the statue placed it under Read Bridge and provided a cheap urn and some joss.
Gamblers visited the shrine and asked for numbers, some successes were recorded. One or two first prizes. So a shop house ground level was provided for the Deity. People came in droves asking the God's assistance in all matters. The usual success story of temples with a large contingent of worshippers that came from humble beginnings.
Now back to the little shrine. No one remembers how it all started. Or her name . The daughter of a committee member and donor to the temple had a daughter who died at age 12 years. The Ah Pek, in trance, communicated that the young miss was not just a normal pretty little girl who died tragically, we know not how, but some illness it was given out. She was in fact an immortal, a celestial being , who had transgressed heaven in some way , judged and sentenced to live as a human being for 12 years. She died on her 12th birthday. So a shrine in the temple was set up for her to be worshipped as "Kor Neo"  (Young miss).   A deified human, a whole new field for me to study but this was my first given example.   The caretaker told me that girl children dying aged 7, 12 and 18 are potential Kor Neos . Entitled to be worshipped in a temple with just 1 joss.
I often think of the young nameless girl in the temple. What is her story. It's not too likely but someone with the answer might just pop up here.  Or with special visit to read the words inscribed on the plaque. That would reveal so much more.
Posted by ronni at 2:48 PM No comments:

Its been a while since I last posted. I found a few old prints from the the old neighbourhood, which I had to put up.
The first picture (B&W) is of Kerr street  during a temple festival in the 1960s. The wayang stage blocks the street, in front of the Tua Peh Kong temple. A Teochew performing the matinee presentation , being watched by largish group of "standing room only"  audience. Its possibly a weekend or a holiday be normally at work at the 2pm show. The characters on stage might well be performing   the "Ho Siew" pre show ritual with characters from The Eight Immortals.
The other three images are from the Leng Hiang Twa temple across Read Bridge , by the river. I'm delighted to find these close up images of the Deity statues, how magnificent they are too. 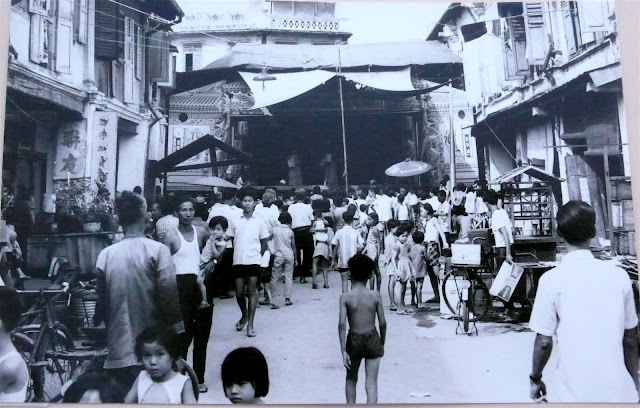 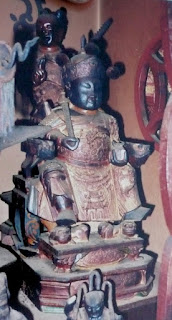 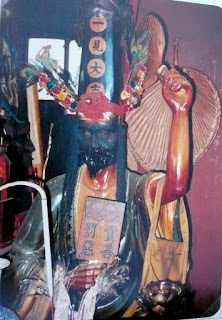 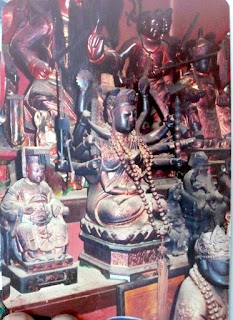 images of Deities within the Leng Hiang twa temple at Clarke quay.

Pic 1 is the attendant to the city God Cheng Huang.
Pic 2 Twa Ya Peh  (Hades official)
Pic 3 Doumu mother of the Nine Emperor Deities, a vegetarian festival celebrated in October by the temple.
Posted by ronni at 11:59 PM No comments: 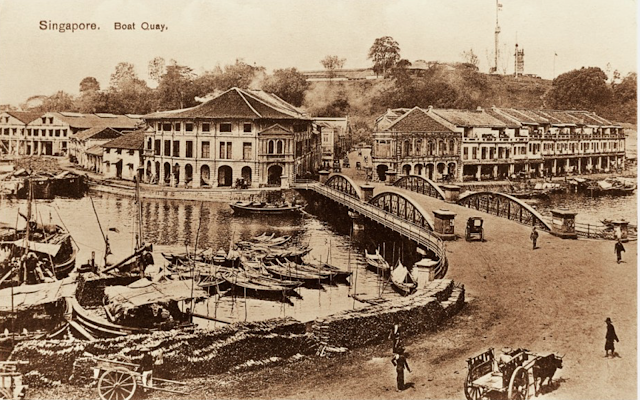 I I found an old post card from early 1900s that clearly shows the stocks of logs neatly piled on the south side of Read bridge. This illustrates the name of the blog Cha Chun Tau, the boat unloading point of wood. 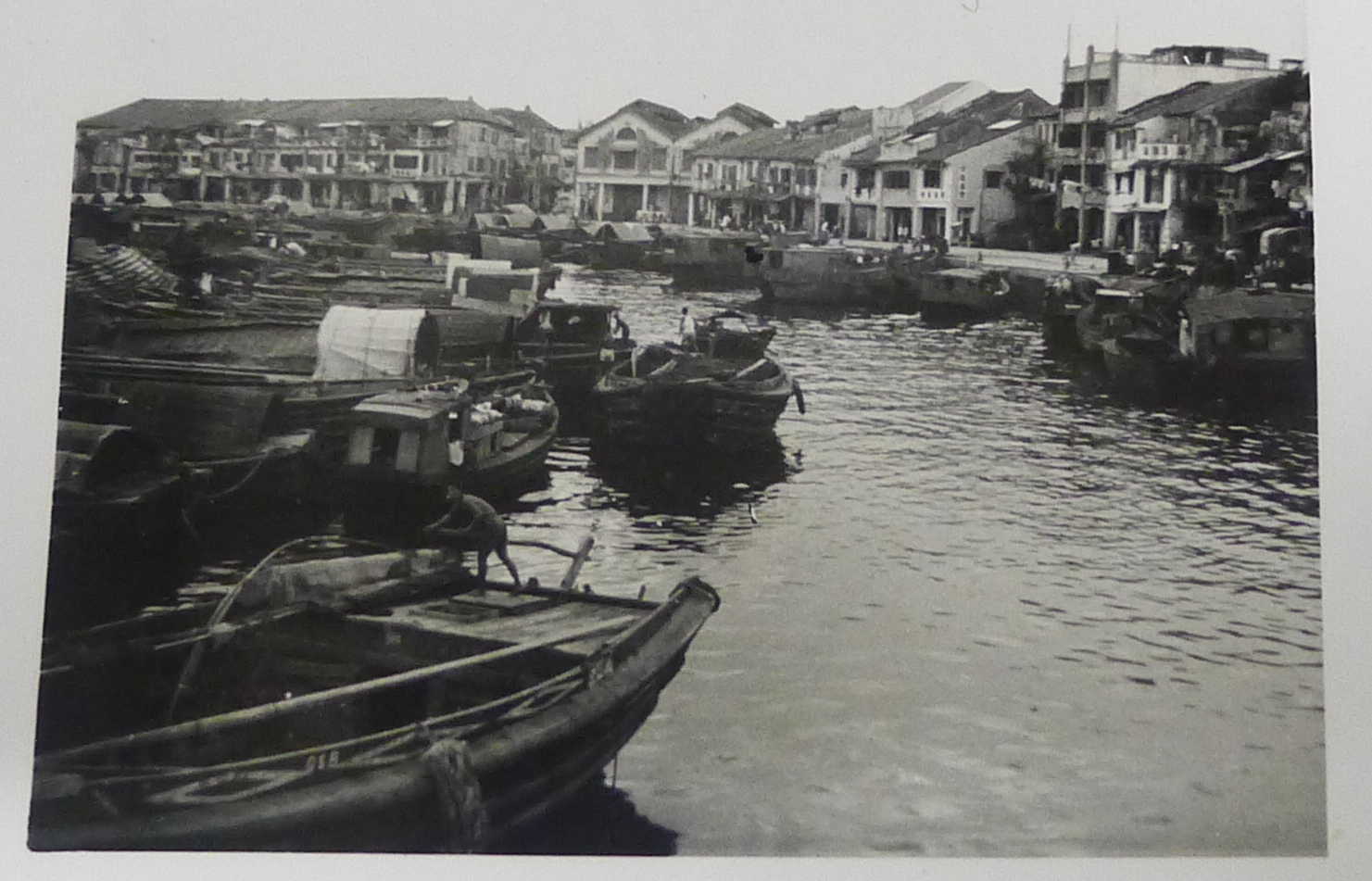 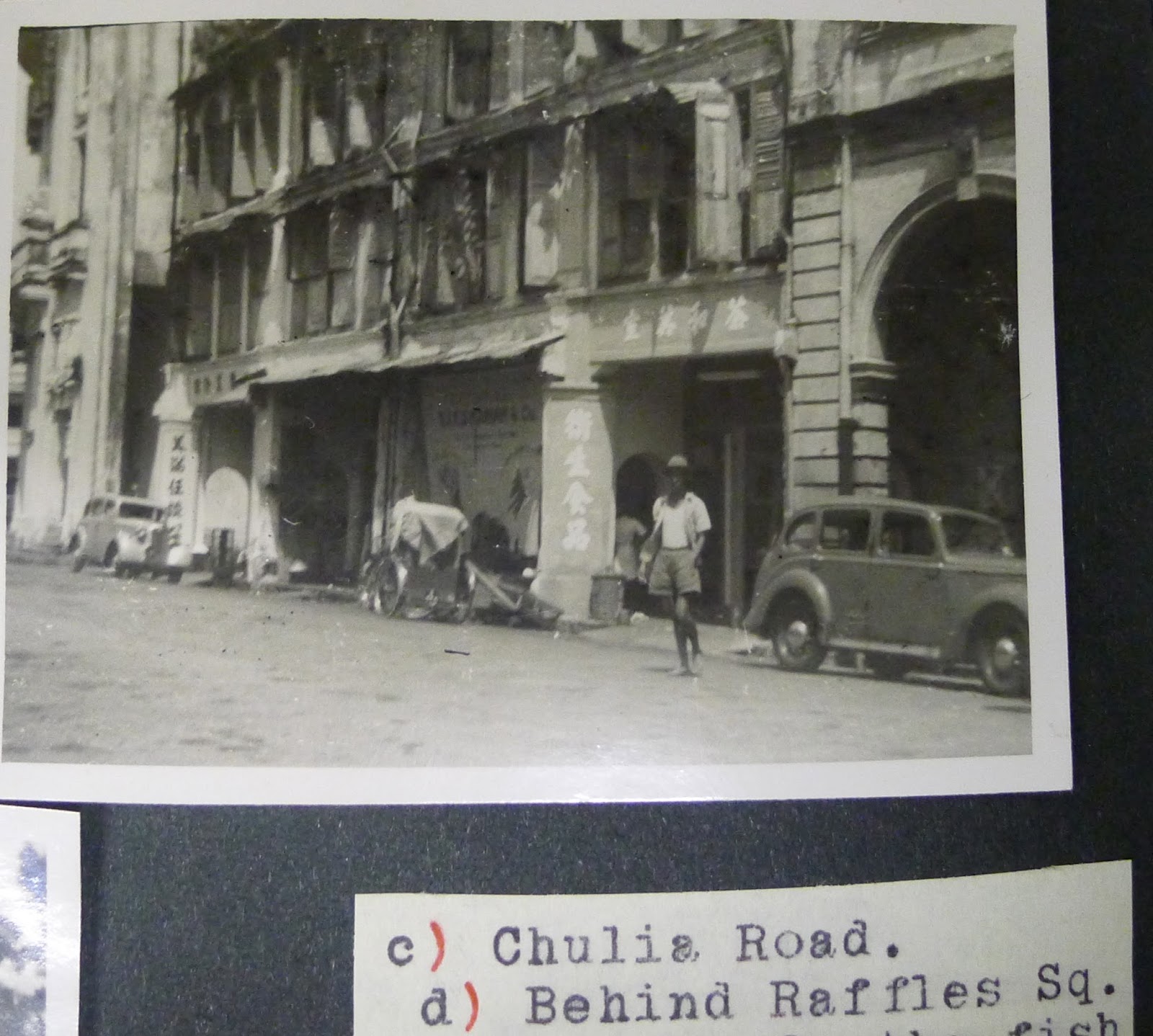 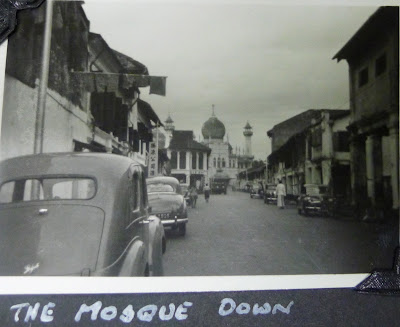 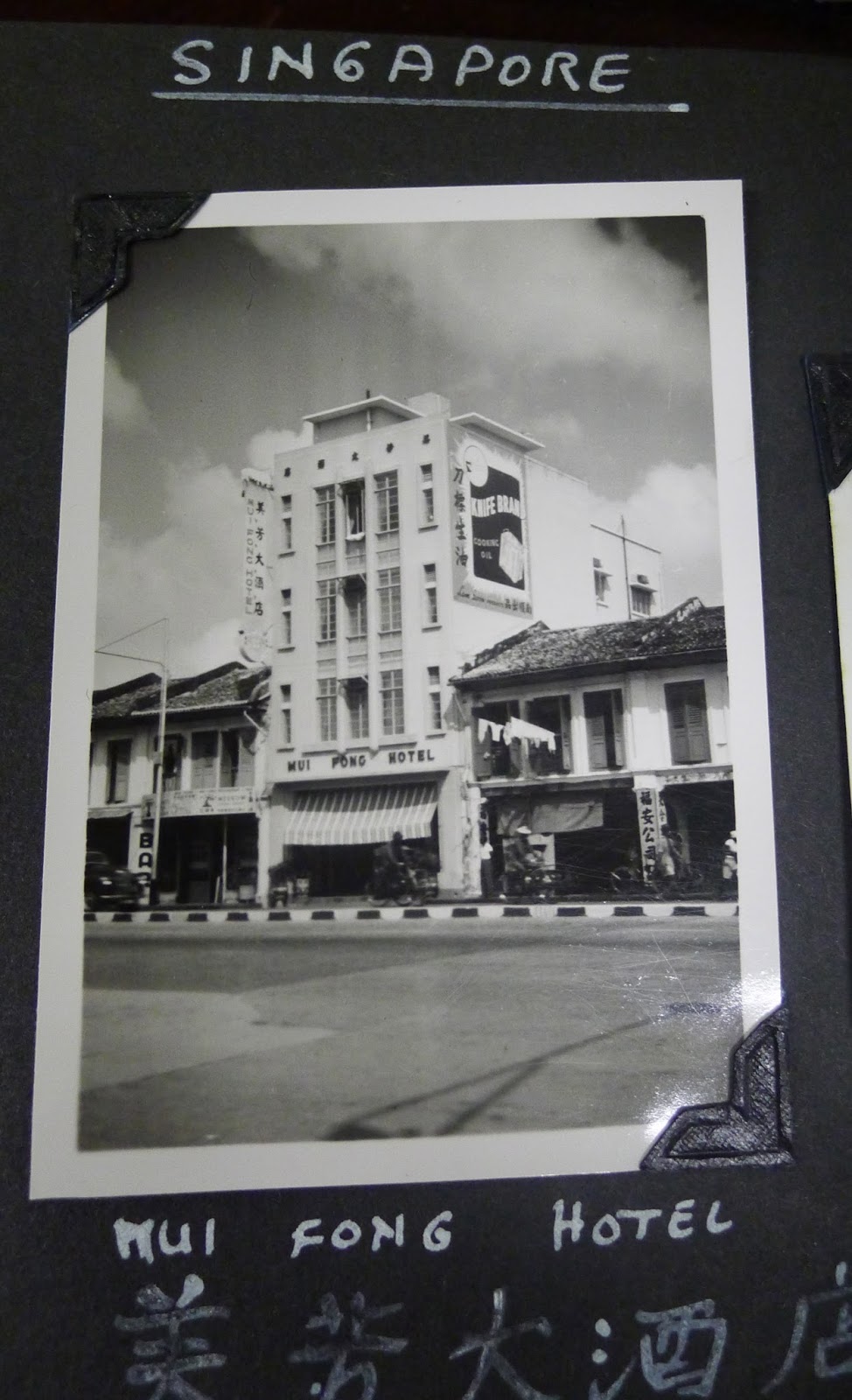 The Mui Fong Hotel is that near peoples park? 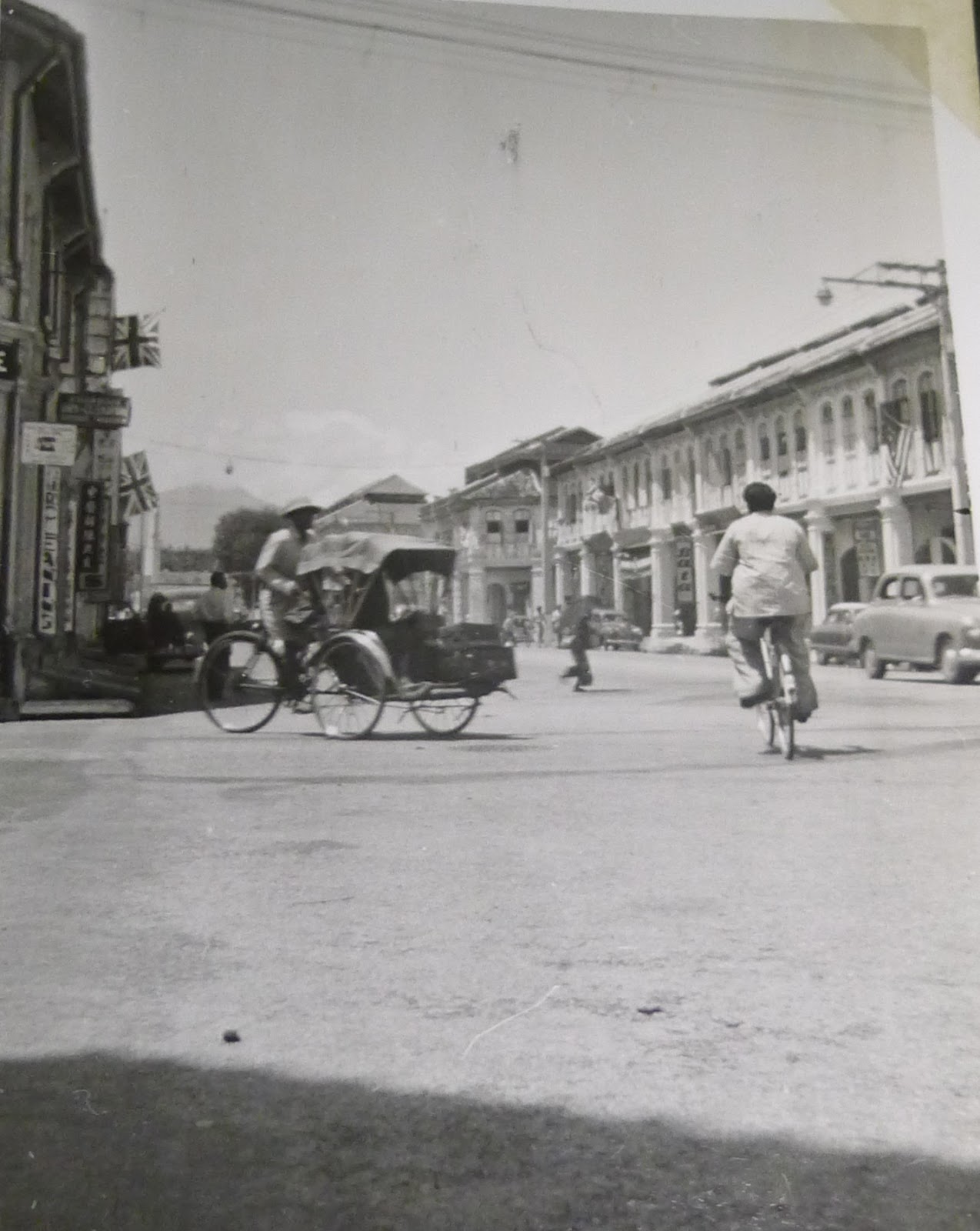 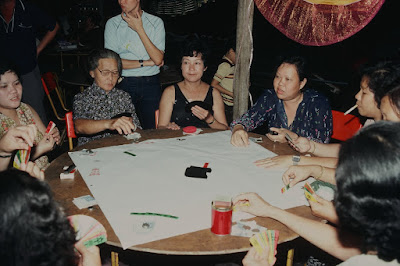 I was delighted to find this photo from the 1970s of a group of people playing Si-sek, literally four colours, indicating the cards. Almost impossible to find a deck of si-sek nowadays, only a few old timers even remember how to play. Such a gathering playing for money would have been illegal and I am grateful for the trust of the players that I, "seow angmoh" (crazy westerner) would not cause them problems with his photo taking....
Posted by ronni at 6:23 PM 1 comment: